I Love Rock and Roll: Part 2

Tomika is a main character on School of Rock. She is the Bass Guitar Player and Lead Singer in the School of Rock band. She is currently a student at William B. Travis Prep School.

She is portrayed by Breanna Yde.

Tomika is Summer's best friend, and friends with everyone except from Clark, whom she treats as her arch-enemy. She has a secret fear to sleep away from home and can't fall asleep without her wobble named Pam Lam. She didn't tell Summer about her secret fear because she felt embarrassed. She has a rock named Lucy, who she thinks brings her luck. Tomika is a risk-taker, who has a passion for skateboarding and being the lead singer and bassist in the band.

Tomika is a fun-loving tomboy with a kick-butt attitude. A gifted bassist with the pipes to match, she’s the definition of a double threat. She’s very down to earth and tells it like it is, which is why she is such a great best friend to Summer. Tomika is more comfortable with a skateboard than a microphone but whether it's on a half pipe or a stage, she’s a star! She's a daredevil when it comes to challenges, and a rocker when it comes to the band!

Summer is Tomika's best friend. Tomika will mostly always stands by Summer's side and will try and help her no matter what. She would do about anything to make Summer happy.

Tomika and Zack are shown to be good friends throughout the show. In the episode, Don't Let Me Be Misunderstood, while working on a love song together, they accidentally kiss. Tomika thinks that Zack kissed her while Zack thinks that she kissed him, but they really kissed each other on accident. Tomika then tells Mr. Finn that she thinks Zack is in love with her​, which is not the case. Mr. Finn advises her to tell Zack how she really feels. So Tomika then went to Zack's house and climbed up to his terrace and told him that she doesn't love him and wanted to be friends again. Zack was relieved that she said that because he felt the same way. They both admit that it was nice that they were each other's first kiss. They then perform their song, This Isn't Love, the next day at school. As of then, Tomika and Zack had no major interactions regarding the kiss or about anything else.

Tomika inspiring the students to be brave. (Total Eclipse of the Heart)

Tomika being forced by Mr. Finn to become the leading singer of the band. (Cover Me)

Tomika and the band having a concert on the streets. (Hold on Loosely)

Tomika talking with Summer about being Demi Lovato. (We Can Be Heroes, Sort Of)

Tomika selling cupcakes. (I Put a Spell on You)

Tomika getting the attention of the crowd. [Money (That's What I Want)]

Tomika in her spider costume. (Welcome to My Nightmare)

Tomika talking about the band name. (A Band with No Name)

Tomika planning for the theme of the music video. (True Colors)

Tomika playing the bass. (Come Together) 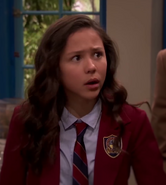 tomika talking about comics
Add a photo to this gallery
Retrieved from "https://schoolofrockseries.fandom.com/wiki/Tomika?oldid=17773"
Community content is available under CC-BY-SA unless otherwise noted.